Showing posts from September, 2021
Show all

Lakebay Marina is a Salty Sight From the Past 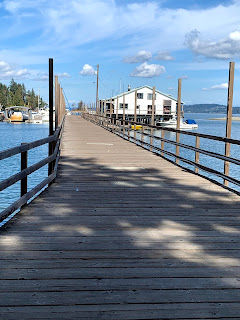 The sights and smells of the vintage  Northwest waterfront are alive and well at the Lakebay Marina in Lakebay, WA.  Off the beaten path on the Key Peninsula near Gig Harbor, the Lakebay Marina harkens back to a rich, salty history.  The nearly 100-year-old marina, nestled in the Mayo Cove in Carr Inlet, offers safe harbor to a small fleet of pleasure craft in a stunning location. To reach the marina, you must first “walk the plank” or pier, out to the old structure. There is not a lot of signage welcoming you to the idyllic spot, but when you see the old, white building at the end of a rather long gang plank you’ll know you have arrived.   The original pier was built in 1884 for private use and in 1928 became well-known for servicing the Mosquito Fleet. The building has been a popular site for locals, serving as a dance hall and gathering place for the community over the years. It was once known as the Washington Cooperative Egg and Poultry Association Lakebay Station. The site was o
Post a Comment
Location: Lakebay, WA 98349, USA
Read more
More posts